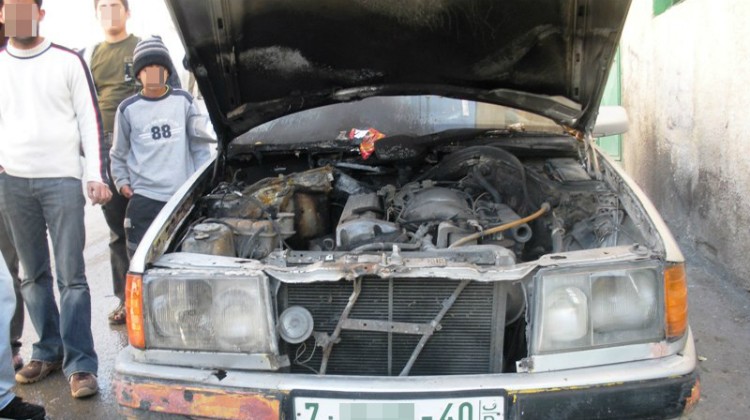 My house is on the main road in Immatin. My car – a Seat Cordoba – is parked outside. On the night of the incident, on January 14, 2010 the night between Wednesday and Thursday, I got home at around 10 pm. I parked my car on the road by our house as usual. I went to bed at around midnight.

At 1:30 am my wife woke me and said, “settlers torched the car, get up quick”. When I asked her how she knew, she said that she had seen a white station wagon with yellow [Israeli] license plates. I got up, got dressed quickly and walked down the stairs to the door. From the window I could see my car by the road, there was a strong fire burning on the front right side of the car. I grabbed a blanket to try and put out the burning left tire, but the fire got stronger again and I couldn’t.

I think that they poured gasoline on the tires because we saw signs of gasoline spilled by the car. The tire exploded and I fell back, I was thrown and fell on my back. Then I saw mu neighbor’s Mercedes burning, and his tractor, as well as a different neighbor’s Mitsubishi. I started shouting to wake the neighbors and get them to come help put out the fires, and they came. Apparently, the explosion and my screaming woke up the neighbors, about seven neighbors came. We managed to put out the fire with blankets and water. It was nearly two am.

Two military jeeps arrived from inside the village, one Hummer and one jeep with several soldiers riding in each. They were doing a routine patrol of the village, the army does this pretty often at night.

I spoke to the soldiers in Hebrew and said, “You know better than me what exactly happened here.” They said, “We don’t know.” I said, “Settlers from Havat Gilad come down.” The soldiers said, “I’ll go up to Havat Gilad to check”, and he did. I thought, what would the soldier do if he caught a settler? Nothing. If it were an Arab, he’d be in jail.

My car was damaged – the engine and two tires were burned, as well as the front part. The damage estimate is about ILS 12,000.

The soldiers returned from Havat Gilad. An officer asked for my ID and my phone number and information about the tractor owner and the owner of the other vehicles. I told the soldier not to leave until the police arrived. But he claimed his work was done, he called the Israeli police and left.

At four am, the Israeli DCO officers arrived in a white jeep and took pictures of the burned cars. They asked who burned the cars and I said, settlers from Havat Gilad. They took the victims’ phone numbers and told us to go to Ariel Police. The following day, Thursday, the police arrived at noon, there were about ten soldiers and police officers. They photographed and took our testimonies in writing. Then I accompanied them in a friend’s car to the Kedumim Police, where we gave our testimony to an Arabic speaking officer. They asked that the witnesses who saw the settlers’ white Subaru come [testify] too.

On January 18. I went to the Qalqiliyah DCO with two witnesses who saw the settlers’ car and they took their testimonies.

My house in the village’s main road on the west side, about twenty meters from the owner of the Seat, which was also torched that same night. I own a silver 1987 Mercedes. The car was parked directly outside my house, as well as my tractor, which I use for farming, it’s a 1977 Fiat.

I was asleep at home, and the neighbor’s screams woke me up. My wife and I looked out the window that faces the road and saw my car was burning, and part of the tractor. So was the neighbor’s car.

My father and I went to put out the car fires with water. There were already several people in the street, neighbors who came to help put out the fires. We managed to control the fire. Apparently, they poured gasoline on the windshield and the hood. The fire burned the front hood and both front sides. The battery was burned, as well as the electric circuits.

The damage was estimated at ILS 10,000 based on used parts. The tractor wasn’t severely damaged, only the seat was burned. There was a lot of gasoline around it, probably they didn’t have the chance to torch it, and ran away.

The soldiers who arrived asked questions, asked for IDs and told us to wait for the police. The police officers who arrived on Thursday took pictures and took our testimonies.

On Thursday January 14, I went to Kedumim to give my testimony. There was an Arabic speaker at the police.

On Monday I went to Qalqiliyah to give my testimony at the DCO.

My house is right on the road at the entrance to Immatin, it’s one of the first houses in the village. Usually I park my car by my house on the side of the road every evening. It’s a gray 1992 Mitsubishi. On Wednesday night I want to bed as usual at around 10 pm. At around 2 am, my cousin knocked on my door and woke me up. He yelled that settlers had torched my car and asked for my car keys. We both went outside with the car keys and began pouring water over the flames. The fire was still burning although the neighbors were outside pouring water on the car. About five or six neighbors were by the car and lots more arrived, including the head of council. We managed to put it out.

Damage to the car: the entire electrical system was burned, as well as the engine hood, windows and parts of the car body. The windshield wipers and the right front fender. I estimate the damage at around ILS 2,000. I had only part of the damage repaired so that I would be able to drive. There was a rumor in the village that a white Subaru station wagon with yellow plates drove quickly through the village streets at 1:30 am. The suspicion is that they threw Molotov Cocktails at the cars and tractor while driving. But I didn’t see that, it’s a rumor. At 11 am, the police arrived to take photos. A policeman, a driver and a policewoman. They took photos and took my testimony. A DCO officer also came, as well as soldiers.

I live by the main entrance to the village, not far from route 55. My house is one of the first houses in the village on the main road, on the left as you drive up into the village. I don’t work and so I’m usually asleep during the day and go to bed late.

The night of Wednesday at exactly 1:10 am I heard a loud noise from a car. There’s a very big speed-bump on the road just outside my house, and so when the car drove over it at high speed it made a noise like a bang. I went over the window to look out, you can see the main road from there because it’s lit all night. I saw a white Subaru station wagon with yellow license plates. The car drove towards route 55 very fast.

Afterwards, I went back into my living room and 15 minutes later the phone rang, my brother who lives in the center of the village told me that settlers had torched several cars. I got dressed and went to the center of the village and then I saw the Seat, the tractor and the Mercedes. I joined people putting out the fire. Then the army and the DCO arrived. I said, “I saw an Israeli vehicle.” On January 18 I went to the DCO in Qalqiliyah to give testimony.