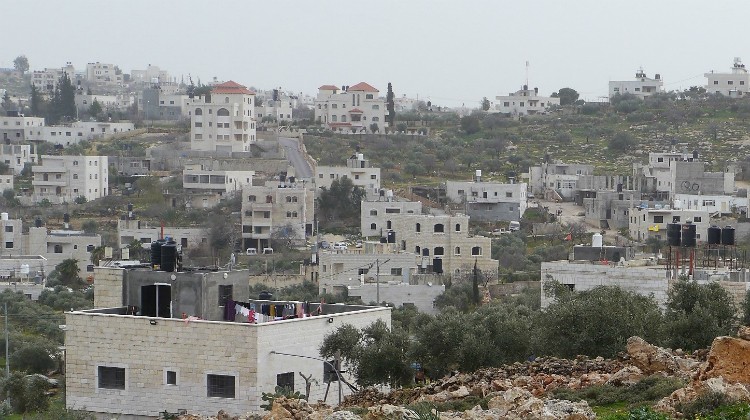 I live in al-Mughayir and I own a lot of farming land in an area called Abu Loumis. The plots that in the area where the incident took place are on the village’s north-west side around two km away, and about 300 meters east of the outpost Adei Ad. I grow 64 olive trees on these plots, which are five dunams. I also have a lot of other land. If I remember correctly, I planted these olive trees in 1991, before the outpost was built.

In 2001, the outpost of Adei Ad was built on AL’s land, he’s from Jalud. The settlers took over his land and built the outpost. Since the outpost was built, there have been problems and we’ve filed a lot of [police] complaints and files Yesh Din helps with. In the past, the settlers made many attempts to take over my land and my brother RN’s land. Each of us has five dunams in this area and we planted olive trees on our land. The settlers set up drip irrigation and planted their own olive saplings between my plot – which is higher up and closer to the settlement – and my brother’s plot, which is lower down. Now, between our plots the settlers have a line of olive saplings. This was in 2005. We filed a complaint for trespassing with the assistance of Yesh Din and following that, on November 13, 2005 there was a field visit with an Israeli DCO officer. As a result, we received a letter from the army’s legal advisor to the West Bank saying we own this land privately, and settlers are not allowed to enter them. Since then, we plow our plots after coordinating with the DCO.

On February 24, 2010 I received a call from AN, my nephew. AN is my brother’s contractor and is out in the fields every day. He informed me that a green tractor owned by settlers was plowing my plot, the higher one. I immediately informed the head of our council, who is also in the Palestinian DCO. The head of council called the Israeli DCO and informed them about the incident and that AN witnessed the incident. I gave him AN’s phone number.

S, an Israeli DCO officer called AN and told him he was at the plot and asked him to come. AN and I drove over in my car. At 4:30 we got to the plot and S, the DCO officer was there. We saw the settler’s tractor stuck in the soil of our plot. Two settlers in a blue car approached the tractor. The officer went over to them and spoke to them. I couldn’t hear what they were saying. Later, a military jeep with four soldiers – one of whom spoke Arabic- asked us what we were doing there. We replied that we were on our land and that the Israeli DCO officer was talking to the settlers, who are plowing our land. The soldiers went over towards the settlers.

It got dark and we left. Officer S stayed and the settlers managed to fix the tractor and move it away before the police arrived. That’s why the police didn’t see the tractor on our land, but the officer said we should file a police complaint anyway, and that he would be willing to testify that the tractor was on our land.

On June 2, 2011 the police closed the investigation file due to “lack of evidence”.
Silence is Golden