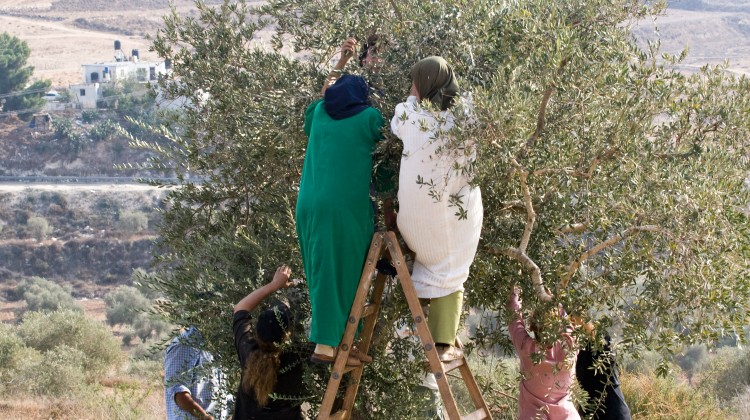 I’m a farmer, I own four plots of land which are between Kafr Qadum and the settlement Kedumim. I grow olive trees on all my plots, and I need to coordinate with the army before I go to my plots and cultivate them. There is no problem cultivating three of my plots and I go there twice a year with my workers during plowing season and the olive harvest, but there is a problem with the fourth plot, which is farthest to the west.

There are about 150 olive trees on this plot which are 60-70 years old. About 12 years ago, settlers from Kedumim cut down 30 olive trees. A settler named YD settled by this plot several years ago, he’s from the settlement Kedumim. He built a structure for himself there, and he has a donkey, dogs, and chickens. He claimed he received the property where he built his shack from my father as a gift. But my older workers claim it’s a lie. My father died ten years ago. Later on, YD claimed that he bought the land, but although we asked him to, he could never prove to us that the land belonged to him.

A few years ago, I filed a complaint with the assistance of Yesh Din against YD, who had come to this plot, drove away my workers, threatened them and then proceeded to harvest and steal the olives. [The police closed the investigation file on the grounds of “perpetrator unknown”]

Last year, again during the olive harvest YD arrived and drove me and my workers away from this plot. When soldiers came with the Israeli DCO, he claimed that the land was his, and they believed him made us leave. He managed to harvest about three sacks of olives by the time they arrived. The DCO took the sacks of olives to the Eyal checkpoint near Qalqiliyah until we could prove that we own the land. I went there, but YD didn’t show up. Because I proved I owned the land to the DCO, the sacks of olives were returned to me, but the olives had rotted. I filed a complaint about this incident as well, and I don’t know what happened further.

Last Wednesday, October 19, 2016 my neighbors who were farming their plots near mine called me at about 3 pm and informed me that YD and his children had forced my workers to leave and were harvesting olives on my fourth plot.

I immediately called the Palestinian DCO, which notified the Israeli DCO. After about an hour and a half, soldiers came with the Israeli DCO and removed YD and his children from my plot. Because I hadn’t coordinated it, I couldn’t go to the plot myself and see things for myself but my neighbors told that the army had indeed removed them. He managed to harvest about half a sack of olives, and the army let him keep it as a gift.

I called the Israeli DCO officer who is well-known in the area and talked to him and asked him for his help. He recommended that I file a complaint against YD at the Kedumim police. On Thursday, the next day, I went to the Kedumim police in the morning and filed a complaint. I noted to the investigator that YD comes to my plot every year every year, threatens my workers and me and forces us to leave, harvests and steals my olives.