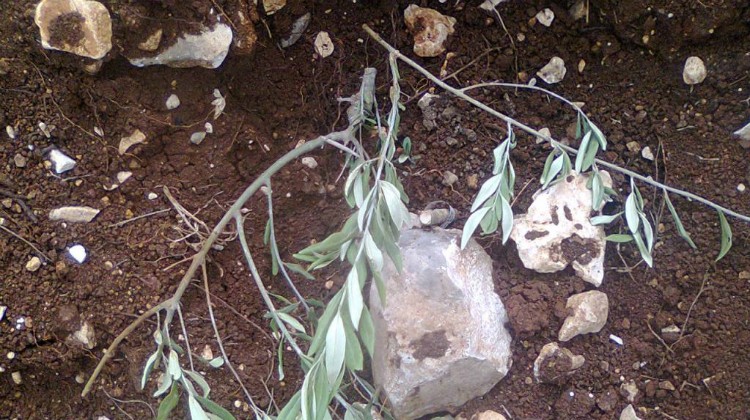 I live in Kafr Qadum. I own a 77 dunam plot of land. It is 1.5 km north-east of the village, and one km west of the settlement Kedumim.  My late father used to tend to the plot until 1973, he used to plant seasonal crops. After that, my cousins took care of the land, and since 1997 I’ve been doing it.

I go to my plot around twice a week and I hire workers and they work regularly, almost daily. The plot can be reached on foot, without access problems.

I took part of the saplings that had been uprooted and cut with me and I went first to the governor’s office in Qalqiliyah, where I was given the saplings that were subsidized, and from there I went to Ramallah to the head office of the ministry of agriculture and reported the incident. After that, I went to the Kedumim Police station to file a complaint, but they referred me to the Israeli DCO in Beit El. At 4 pm I got to the Israeli police in Beit El and they took my testimony there. When we finished, I was asked to sign my testimony, but I refused because I don’t sign documents I can’t read. I received a receipt for the complaint.

On May 1, 2014 the police closed the investigation file due to “lack of criminal offense”.
Silence is Golden