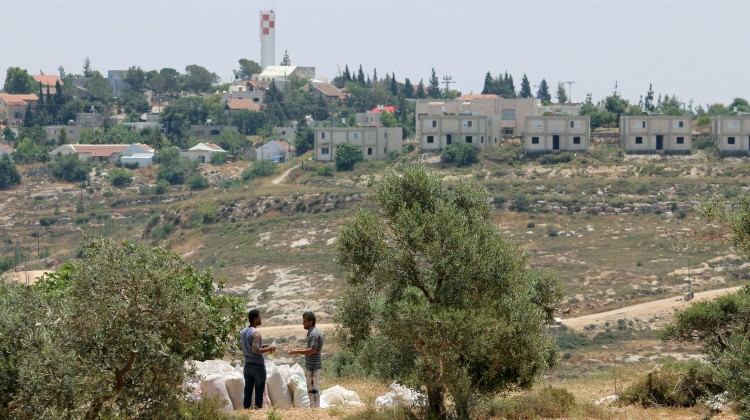 My land is south-east of the village of Qaryut, on a plain between two hills, on one hill is the settlement Shvut Rachel and on the other – a military post. I may go to my land only with the army’s permission. The road to my land was blocked for car traffic and in order to reach it I have to walk on rocky land for two km. It takes 20-30 minutes to walk it. You can reach my land by going through the settlement of Shvut Rachel, but as a Palestinian I’m forbidden from entering the settlement.

Every few days, I look over to my land with my binoculars. On Saturday June 16, 2007, after 8 pm, when it had gotten dark, I stood with my children by the council building, which is at the highest point of the village and looked out over our land. We saw lights twinkling around the land. It didn’t bother us, because it was a Saturday and the Jews don’t work on a Saturday, and also because we’ve seen lights there in the past.

The following day, Sunday June 17 at 1 pm, after prayers at the mosque, I looked out with my binocular over to that same plot and saw a yellow tractor, a military jeep, a civilian jeep and several people. The tractor uprooted one of my olive trees with its roots and set it down, going on to additional trees – uprooting them and setting them down on the ground.

I called up the officer at the DCO and told him. He said, “Go to your land, I’ll call the police.” After about two hours I reached my land, two or three policemen arrived, I think they were officers.

By the time we arrived, the tractor wasn’t there, or the jeep, the people, and there were no trees. I imagine they took the trees away in a truck. I had 300 olive trees that were 40 years-old, and between them I had apricot and almond trees. The policemen photographed the entire plot. There was nothing left except holes in the ground. I stayed there with the policemen for a while longer, and then they took me to Mateh Binyamin Police to file a complaint.

We arrived at the police station at around 6 pm. I waited outside the building until after midnight, they barely even gave me water. I went in to file a complaint and give testimony, it took about half an hour, and then they said, “You can go home now.” I said to the investigator: “I’m not moving from here until you drive me.” They drove me in a car on route 60 until the turn off to the settlement of Shilo. From there I walked for 50 minutes until I got home. I got home at 2 am. My family was very worried about me. I talked to them on the phone, but they were still worried.

On Wednesday June 27, 2007, a DCO officer called me and arranged to meet me at my land at 12 pm. He said the settlers would return 140 trees and plant them on my land. He offered me saplings to replace the trees that broke while being uprooted. I told him I would accept trees that were at least five years-old.

A settler was convicted of cutting down or uprooting an olive tree without a permit as part of a plea bargain with the State Attorney’s Office. The Jerusalem Magistrates Court found that the offender brought people to the grove, falsely presented herself as the landowner and ordered them to uproot 300 olive trees that were scores of years old. Most of the trees were replanted in Israeli outposts for decoration. The court imposed a fine of ILS 6,000 and 180 hours of community service.
Silence is Golden