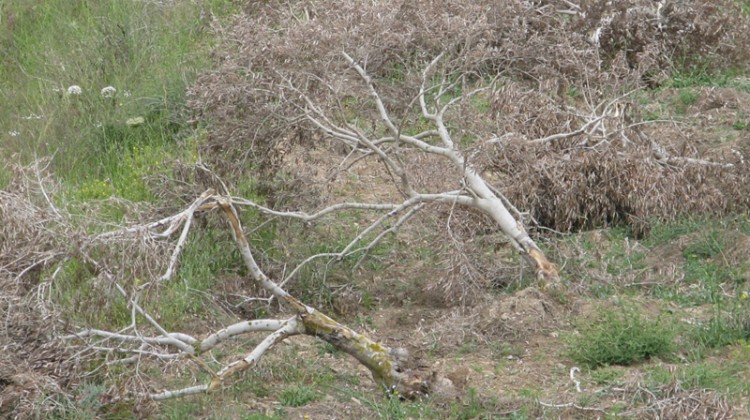 My family owns 25-30 dunams of land, which we inherited from my father who bought the plot in 1964 from MA, who’s from Immatin. The plot is still registered in his name, and we have the purchase contract he signed. The plot was divided among the heirs, four sons and a daughter. So that each heir tends a plot of five-six dunams.

The plot is in an area called Khabail A’wayus. The land is 300 meters east of Badariya’s house, may she rest in peace.  And around half a kilometer south-west of the settlement Mitzpeh Yishai ]Kedumim]. Our plots have about 400 olive trees that are 23-40 years old, 50-60 fig trees, 30-40 almond trees, one carob tree, three pine trees and around seven various fruit trees. The land is in a hilly area, and in the valley below is a plot belonging to a different family from Kafr Qadum.

We got to our land only after coordinating with the DCO. During plowing season, the olive harvest and the wheat harvest. We are always given too little time and it’s never at the right time, this doesn’t provide for farming needs. The coordination procedure looks like this: the local council on behalf of the landowners approaches the Palestinian DCO, which then coordinates with the Israeli DCO.

On March 15, 2010, our entire family – 15-20 people – went to plow and tend our land in coordination with the DCO. We had just one workday coordinated, from 7 am to 3 pm. Because we had very little time coordinated, we didn’t manage to finish our work, and all the brothers coordinated another work day for April 30.

On April 30, I walked with my children to my plot, and on our way we saw a military jeep and a DCO vehicle parked by Badariya’s house, they had arrived as part of the DCO coordination. We arrived at around 7 am, we were the first ones there of my brothers. When we got to our land, we sat down and took a little break, and at around 8 am we got up and started working. We were the only ones there, the rest of the family hadn’t arrived yet.

After assessing the damage, at around 8:30 I called my brother S, who said he was on his way over. I walked over towards the military jeep – the army’s escort vehicle. One of the soldiers stood by the jeep, others sat inside, I couldn’t see how many. I went over to the soldier who was standing by the jeep and asked where the DCO jeep was. He replied that they left, I asked when they would be back, he said at around 2 pm, and I told him to call them because I needed them. At around 9:30 am, the DCO vehicle arrived with a DCO officer named A, we reported the damage and walked over there together to see it.

In the meantime, my brother A arrived, and the three of us walked over and counted his trees that had been uprooted. Officer A phoned the DCO and asked for someone with a camera to come and photograph the 36 uprooted olive trees. I heard him report the incident over the radio and ask them to call the police. At about 10:30 the officer left, and the photographer joined the soldiers in the military jeep, which was still parked there.

Right after officer A left, my brother S arrived, who owns the plot that was harmed, with his wife and kids. We waited about two hours for the police, and then at around 12:30 I went up to the soldier standing by the jeep and asked him to talk to A, he called someone – I don’t know who – and nobody came. Half an hour later, at around 1 pm I went back to the same solider and asked again what was happening and didn’t get an answer. At 2 pm we left and went home. We couldn’t bring ourselves to work in that discouraging situation. We didn’t hear anything from the police. I want to note that the incident was mentioned in the Palestinian media and on Israeli Army Radio. Legally speaking, the land is owned jointly by all the brothers, and the subdivision is based on the family’s agreement.

I want to point out that there are military cameras all over the settlement Mizpeh Yishai, there are cameras pointed at our land.

On November 1, 2010 the police informed Yesh Din that it had closed the investigation file due to “offender unknown”.
Silence is Golden