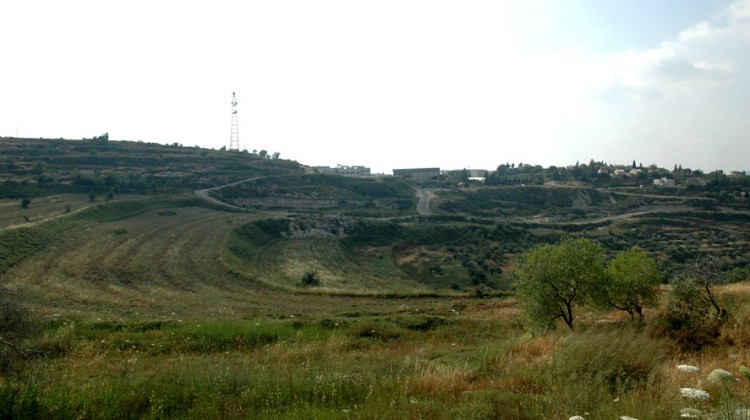 My grandfather owned a 335 dunam plot. It’s called Qa’adat Halaweh. The plot is registered in my father’s name. The land is about 200 meters north of the village of Jit. It borders the road going up to the settlement of Kedumim.

Four months ago, in January, the organization Rabbis for Human Rights donated about 400 olive saplings. They joined us and we planted the saplings on the plot together.

Two months later, in March, at 8 am we went to the field to plow, escorted by volunteers from Rabbis for Human Rights, we were about ten people, relatives and volunteers. While we worked, a yellow car with Israeli plates drove up the road towards Kedumim, stopped by us for a few moments and then drove on. I think the car belonged to DV, head of Kedumim council. I know her and I’ve seen her driving such a car.

About five minutes later, two settlement security vehicles stopped on the road by us, one was white and one was blue, I recognized them. Security vehicles patrol the road, driving off and returning and appearing from time to time.

About ten minutes later, two military hummer vehicles arrived. About ten soldiers got out, two looked like high-ranking officers. One of these officers turned to me and asked me in Arabic: “Who owns this land?” I said I own the land. The officer told me, this is a closed military zone for Israelis. The volunteers who came with us left.

Five of us were left, myself and my family with the tractor. We continued to plow. The cars drove off and three soldiers stayed to guard us. The settlement security vehicles continued to patrol, appearing and disappearing about every 15 minutes. We worked until 4 pm and then we went home.

While I was standing there stunned, taking in the sight of it, a settlement security vehicle pulled up. That same white vehicle that was patrolling last time. The car stopped on the road. We didn’t say anything to each other, I left while the vehicle stayed where it had stopped.

Two days later, on May 8, 2007, I went to Kedumim Police to file a complaint. The next day, after coordinating with the police, I waited on my land and at 5 pm a police vehicle and a military jeep arrived. There were two policemen in the police car, and an officer and a driver in the jeep. I showed them the damage, they photographed me in the field with the remains of the uprooted saplings. The policeman asked me what the distance was between the saplings, I said 4-7 meters.

Suddenly, settlers driving ATVs drove up. They drove down from the settlement Kedumim Illit and stopped about 300 meters from us. I was about to continue presenting the damage to the policemen, but once the settlers showed up, the policemen rushed to cut things short and leave. It seemed they were running away from the settlers.