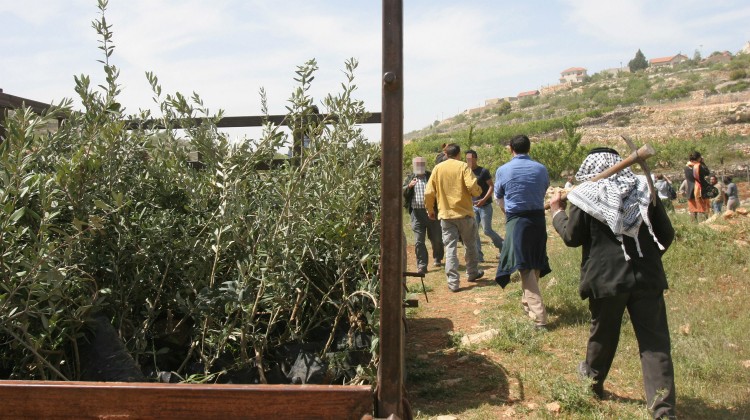 On the day of the incident, July 20, 2012 I was on my plot, which is north of Halhul, around 500 meters south of the settlement Carmei Tzur. It was around 7 pm. I was watering my trees. It was the first day of the fast of Ramadan. When I finished watering and prepared to return home, I notice someone in I’mad Qarajeh’s plot, which is about 70 meters from my plot. I went over to see who he was. I saw that it was a settler. He wore a kippah, glasses and was 50-60, with a black and white beard, he was full, around 1.70 meters tall.

I saw him uprooting fakus plants and asked him in Arabic, what are you doing? Why are you uprooting? I understood that he spoke a little Arabic. He said, “This isn’t yours”. I said it belonged to my neighbor. In the meantime, I noticed a new silver Mazda vehicle parked by I’mad’s plot, with a young man who was 15-17, tall and thin inside. The settler started walking towards the car and I walked after him. He got into the driver’s seat and started the car. I stood in front of the car and called the police. They didn’t answer. The settler began driving and I was afraid he would run me over. I moved over. I saw the car enter the settlement Carmei Tzur. I memorized the license plate number, but later I forgot it.

I called I’mad, who arrived within ten minutes. We assessed the damage to his plot and counted twenty uprooted plants. I’mad called the police. They didn’t answer him either.

The next day at 10 am we went to file a police complaint accompanied by Yesh Din. We only went in at 1 pm. We waited for another hour until they found an Arabic speaking investigator. We filed a complaint. The investigator showed me photographs on the computer. I was 70% certain I identified the settler looking at portrait photo and 80% when I looked at a full body photo. The investigator tried claiming it was someone from Nablus.

I own a two dunam plot north of Halhul, south of the settlement Carmei Tzur, 500 meters away from the settlement gate. In 2009 I went back to farming the plot, and I planned to plant grapevines, almond and other fruit trees. Despite the distance between the plot and the settlement, the settlers don’t like it being cultivated, and I suffer from settlers damaging my crops. Since 2009, there have been about ten incidents in which settlers damaged my crops. Following these incidents, I filed five complaints, the last one was about a month ago, with the assistance of Yesh Din. The damage includes uprooting trees, grapevines and plants, especially fakus plants, which I plant in the summer.

On July 20, 2012 a relative of mine named AA called me and told me that he was by the plot and had seen two settlers by it, one of them was uprooting fakus plants. He asked me to come over immediately to see the damage. My house isn’t far from the plot and I walked over and arrived within ten minutes.

When I got to the plot, AA was still there, I saw the damage at ththe settler – who was no longer there – caused. I could identify the settlement security vehicle parked by the gate to Carmei Tzur. I counted about twenty uprooted fakus plants that had begun to bear fruit.

AA told me that he had come to his plot that day in order to water his trees, and had suddenly seen a settler on my land and a grey Mazda parked by my land with another settler inside. AA told me that went to my plot and caught the settler while he was uprooting my plants.

AA told me that after asking him what he was doing there, the settler responded that this land doesn’t belong to Palestinians but rather to settlers. The settler jumped into the car. He was 40-50, and the one in the car was 16-17, maybe his son. AA managed to memorize the license plate number and even tried to prevent him from driving away, but he was nearly run over by the car. Later, AA forgot the license plate number.

While I was on my plot, I called the Etzion Police but they didn’t answer. I called the Etzion Police again the following day, on Saturday and again no response. On Sunday, July 22, 2012, I went to the Etzion Police station to file a complaint and explained to the officer that I had come to file a complaint for damage and that I had filed complaints previously. The officer instructed me to wait because they didn’t have an Arabic-speaking officer. After waiting for two or three hours, that same officer came out and after apologizing for there not being an Arabic-speaking officer at the station, he told me to file the complaint at Kiryat Arba Police.

The following day, July 23, 2012 I went to the Kiryat Arba Police station with AA and a representative from Yesh Din. We arrived at around 10 am, and only at around 1 pm were we allowed to enter the station. Then we waited for another forty minutes or so until the officers found an Arabic-speaking officer. I filed a complaint and AA gave detailed testimony regarding the incident. There was a photograph lineup and AA identified someone who resembled [the settler].

I want to note that the problem isn’t only the financial damage but the sense that settlers harm the plot because they want to take over it. The main damage is uprooting grapevines, which were supposed to have borne fruit by now.