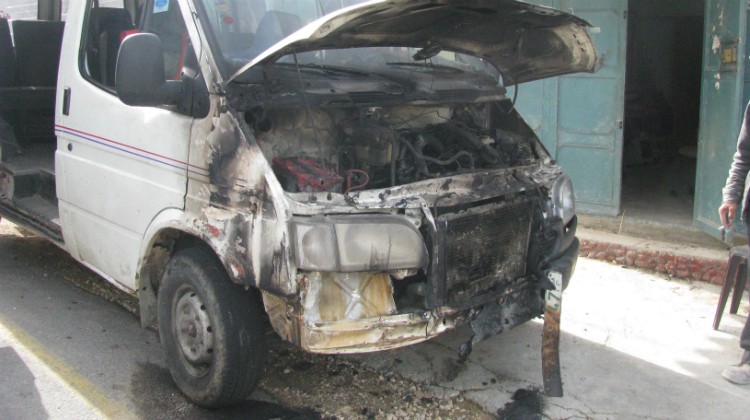 Khader Naj’ar, 41, married and the father of seven, Burin

I live in Burin. I’m a welder and I also work driving workers from Burin to the Kedumim industrial area in my Ford Transit. We have a lot of trouble in Burin with settlers from Yizhar. They ruin our land and uproot our trees. I have a plot of land south of route 60, and in 2002 settlers uprooted 43 trees. In 2008 they came back and broke 40 trees. My story is similar to the stories of other farmers in this area. Settlers prevent us from farming our land properly. For most families in this area, farming is our livelihood. Farmers can’t get to their land because of problems and so they look for other sources of income, like me.

On the night of Wednesday March 10, 2010, I was asleep at home. At 3:30 am, someone from the village’s civil guard came to my house and knocked on my door. He said, give me your car keys – the Ford Transit I use to drive workers – because it’s on fire. I got dressed and went with him, the vehicle was outside my house on the road, ten meters from my house.

I could see the front part of the vehicle burning, and the village fire brigade trying to control the fire. The fire brigade and the civil guard are in the same building. It’s a tall building and they were able to see fire and smoke down the road. They told me they saw a white or gray car with Israeli license plates driving out of the village. There were three people in the car. They couldn’t make out any other details because it was dark. We managed to put out the fire within half an hour.

At 7 am I went to the Palestinian police in ‘Urif by myself and filed a complaint. I meant to file a complaint at the Palestinian DCO in Nablus, but then the police and the Israeli DCO arrived. They photographed the vehicle and said they needed to run tests on it. They ordered a tow truck and took my vehicle. I told them I didn’t have the money to order a tow truck to get my vehicle back, but they said they would return it within a day or two. That was on Wednesday and today is Sunday and I still haven’t received it. I need my car to make a living.

On June 5, 2012, over two years after the torching, the police closed the investigation file due to “offender unknown”.
Silence is Golden