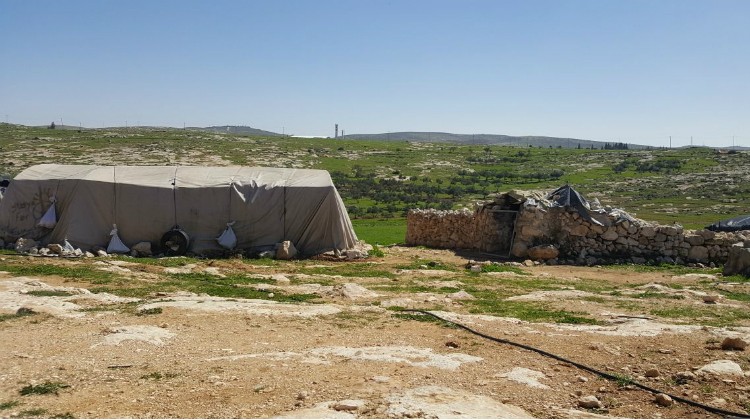 I’ve lived in Susiya since 1980. My father used to live here. I work as the secretary in the school in Susiya. I also own a flock of sheep and I 27 dunams of land in Susiya. We live in a mobile home, which was demolished by the civil administration four times. The army also closed off access to my land from the main road, and I have to go through my neighbors’ land to reach mine.

My father was the first to complain about the settlers of Susiya when in 1984 they stole one of his donkeys and broke his arm. He filed a complaint at the Hebron Police.

Last Saturday, February 24, 2018 I was on my land repairing my house. Suddenly I saw about 50 settlers, young men who were 16-24 by the military post on the top of the hill. They came near our mobile home, and from 30-40 meters began throwing rocks at my wife, our two young children and me. We stood in the middle of our land during the incident, so that they wouldn’t come too close to our houses.

They shouted at us to leave. They said that this isn’t our land and that we aren’t allowed to be here. They demanded we show them the deed to the land. While they were throwing rocks at us, one of the soldiers came down from the post and stood with the settlers, without intervening or stopping them.

Then my 26 year-old son said to the soldier: “Why are you watching and not doing anything – call the police!” The soldier used his phone to call and when he finished the call, he moved the settlers back towards the army post.

The stone throwing and the shouting went on for about 45 minutes. We didn’t fight back so that they wouldn’t call the police and complain against us. None of us was hurt by the rocks. We have photos showing the soldier standing with the settlers. You can identify some of them in the photos.

I want to file a complaint against the settlers so they don’t do it again. I also want them to open the path from the main road so that I won’t have to pass through my neighbors’ land. We can’t sleep at night because we’re afraid the settlers will hurt us.

On October 14, 2018 the police informed Yesh Din it had closed the investigation file due to “offender unknown”.
Silence is Golden