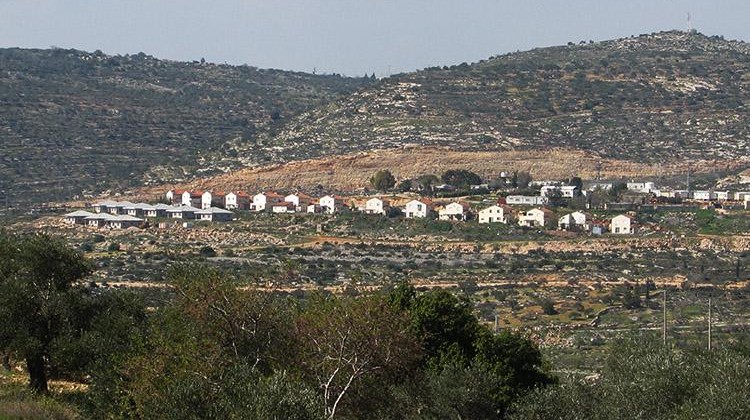 Our relationship with the settlement Rechelim were okay until about a year ago. Since then, we’ve suffered from repeated harassment: young people and teenagers come down from the settlement and come close to our house and throw rocks, curse and laugh loudly. This happens during the daytime and at night. When the harassment repeated itself, I installed bars on all the windows. We stopped sitting in our garden because we are afraid of the settlers.

For example, a month ago at 2 am I heard noise from outside, I went outside with a flashlight and saw people running towards the settlement. During Passover, close to the time of the incident I’ll describe soon, a group of settlers would come every day for four days at 3 pm and come into our yard. When anybody from our house went outside, they would walk back a few meters towards the path and keep cursing.

During one of those days, my wife left the house and right away the settlers starting cursing her using humiliating curses (“whore”) and shouted that our family has to leave the house. While this was going on, I went outside to protect my wife, I tried talking to the settlers, I told them that this is my house and that they were invading it, but they responded with curses. They cursed and humiliated my family and my faith. This confrontation lasted for 1.5-2 hours. I didn’t complain to the police or the DCO about this incident because I don’t want to get into trouble, I live by the settlement and am afraid. The gangs of harassers are usually six teenagers ages 14-17. It’s always the same teenagers.

On the day of the incident about which I’m giving my testimony, Saturday May 7, 2016, I was taking a nap, two of my sons who work in the industrial area Barkan and therefore don’t work on Saturdays were in the backyard fixing cars, and my wife was busy with her work inside.

At I think 3:30 pm I awoke to the sound of voices and shouting from the yard. I heard the gang cursing and threatening that “We’ll burn your house down, like the Dawabshe’s house.” I went outside, my eldest brother Na’im, his wife, my two sons and wife were already in the yard. My brother called the police and spoke to an officer named A, he passed the phone to me and I explained what was happening. Ten minutes later, officer A arrived in a police car and the gang ran away. A called me and said he was in the settlement Rechelim and was taking care of the matter and asked me to file a complaint.

On Monday May 9, 2016 I went to the Israeli DCO in Huwarah to file the complaint, but I saw a very long line there, about 50 people were waiting, and I decided not to. I also went to the Palestinian DCO in Nablus and they gave me a phone number and told me to call it in case of another incident.

I have no doubt that the people who participated in the incident were settlers – judging by their appearance – their clothes, head covering, etc. One of them is tall and dark skinned, he wore a blue shirt. The others wore white shirts and dark pants; one is fat and redheaded; the other had light hair; and there were others. They weren’t masked but I can’t identify their faces because I have a problem with my vision.

On the day of the incident, Saturday May 7, 2016 I was in the yard with my sons, who were repairing cars. At around 5 pm, I noticed a group of settlers – six of them – coming from the direction of the settlement Rechelim. When they got close to our yard, two of them left the gang and four stayed. One of the four started throwing rocks at our house and they all started cursing and yelling threats and telling us to leave our house or they’ll burn it, like the Dawabeshe home in Duma.

I called my sister-in-law and asked her to come out of her house, which is by ours and come film the incident. Although the attackers threatened us to stop filming, my sister-in-law continued filming and we have the incident documented. My husband, who was asleep woke up from the shouting and came outside to the yard.

If necessary, I can identify the group with no difficulty. They’ve been bothering us regularly for a year.

On December 5, 2016 the police informed Yesh Din it had closed the investigation file due to “lack of evidence”.
Silence is Golden